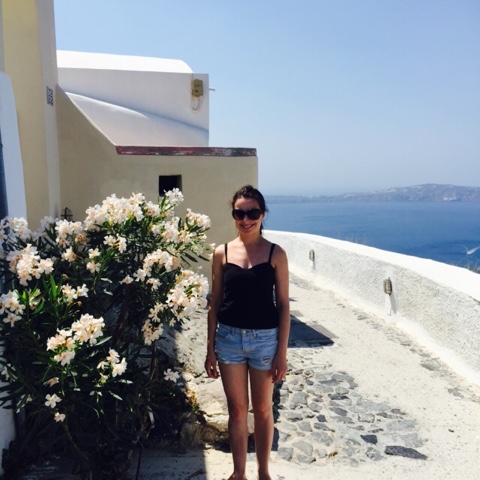 Santorini was our next stop, after Athens. We left Athens quite early in the morning, and arrived on the island around 6:45am. Flying over Greece was amazing, as I could see many of the surrounding islands and I had fun trying to work out which island was which! It was quite scary when we started to descend, as we were incredibly close to the water, so much that I thought we would land in the sea. Alas, our pilot safely landed us, but I was glad to be back on solid ground.

As mentioned, we got there before 7am, and after collecting our luggage from the (very tiny) airport, we joined the taxi rank. Apparently the hotel we were staying at is notoriously hard to find, but luckily our taxi driver knew exactly where it was. Driving through Santorini so early in the morning was very peaceful; there was hardly anyone about. My first impressions of Santorini was that it was quiet, peaceful and very calming. I think after the bustle of Athens, it was nice to wind down and really start to feel like we were ‘on holiday’.

We stayed at the Nomikos Villas, which is located in Firostefani. It’s a
small villa in comparison to a lot of the accommodation on the island, with around nine rooms. We were dropped off near the hotel and an incredibly
strong man was there to greet us and take our bags. He carried our two large
suitcases on his shoulders all the way to the villas; a real life Hercules!
Because we were so early, our room was not ready. Note to self: never book an early flight again.
The manager Natalia offered us complimentary tea/coffe and stowed our suitcases
away so we wouldn’t have to lug them around. Sitting by the pool, the first
thing that struck me about Santorini is how blindingly bright everything is! It
honestly looks like a photoshopped postcard and I had to keep pinching myself
that I was actually there. I felt incredibly lucky to be there.

On that first morning, we decided to go for a walk to kill some time, and stumbled
across a little cafe called Galini. It is part of a hotel by the same name and
has the most beautiful decor. By that stage we were starving, so we decided to order breakfast. What a feast it was! It included tea, juice, fresh fruit, oats with yoghurt and some biscuits. This
turned out to be my favourite place to eat during the entire stay there. The
food was fresh and tasty, not to mention the beautiful view.

After a few hours of exploring, our room was finally ready. I have to say the wait was worth it. We had a one room villa with a cave
bathroom, small kitchen and large living area. It was incredibly spacious and very
clean. One thing I discovered about life in Santorini is that you can’t flush the toilet paper; it goes
into the rubbish bin instead. It’s because the pipes are too old and too narrow
for toilet paper to get through, so it can clog up the system. At first it felt
really strange doing this (quite dirty actually!) but I soon got used to it.

Our villa was ‘poolside’ so it opened up onto the pool area. There were about four villas on our level and the rest were higher up. Breakfast was served each morning by the pool, overlooking the ocean.

We spent the first day exploring the island. Santorini is made up of twisting, cobblestone stairs that are really steep and take you all over the island. No matter where you stop, the view takes your breath away. I know it sounds cliche but it’s true! I never got tired of looking out across the island.

We went to a great restaurant that first night, called Remvi. The only reason I remember the name is because we have a restaurant called ‘Remvi by the Bay’ in Wiliamstown here in Melbourne. The restaurant was set outside, facing the ocean and was beautifully decorated.

We stayed in Santorini for three days, and developed a sort of routine. Most days we would wake up early, have breakfast and spend some time by the pool, either to swim or sunbake. We would then go for a long walk, and have an early lunch. A nap would follow, and either we would go exploring around the island or spend some time by the pool again. After dinner, we’d go for another walk and then come back to the villas, and relax outside with a book and a drink.

We both wanted to do some type of boating activity, so Nomikos Villas booked
us into a half day boat cruise around the Caldera, including lunch and drinks.
It was a private boat with only eight tourists and two drivers. This was a
great way to see the island and to take a dip into the ocean!

The below photos show Santorini getting darker throughout the night!

Another major part of Santorini are the donkeys. Like everyone else, I thought it was quite charming to see donkeys scattered throughout the island. I was wrong. I had my heart set on taking a photo atop a donkey, just like my dad did back in his village all those years ago! It started out innocently enough- the path was quite wide so it seemed safe to walk alongside the donkeys and all of the tourists. However, out of nowhere, a donkey broke away from the pack and rammed me against the post! I was physically shaken and had no choice but to carry on walking until I got to the port! Thankfully we took the cable car back up (which was just as scary in my opinion!). It’s funny now, but at the time my legs turned to jelly and all I could do was focus on getting out of there!

There is so much to do and see in Santorini, and it truly is paradise. I loved the lazy pace of the island, the fresh food and the friendly nature of the locals. It’s what I always imagined island life to be like.

Make sure to check back for my next holiday post, featuring Crete and Paris!

Have you been to Santorini?