Today I thought I’d share some of my photos and travel stories that have
been lost in the archives! Growing up, I never travelled much. Mildura was the
farthest we ever ventured out to but even at a young age I loved
packing my suitcase and travel bag for the 8 hour double decker bus trip; some things never change! I went on my
first overseas trip at the age of 26 to New York and it was the best trip I’ve
had to date. I remember so much of it and after that holiday, I caught a huge
case of the travel bug which hasn’t died down since. Sometimes when I think of
where I’ve travelled to, I have to pinch myself. Seeing the Acropolis up close,
taking the ferry to the Statue of Liberty, walking up to the Eiffel Tower; I
know these may all sound like clichés but nothing prepares you when you see it in
person! Travelling really changes you and opens your mind to possibilities. I
don’t think I could ever be ‘done’ with travelling.

I thought I’d put some photos up and explain a bit about where it was and
what I was doing etc. 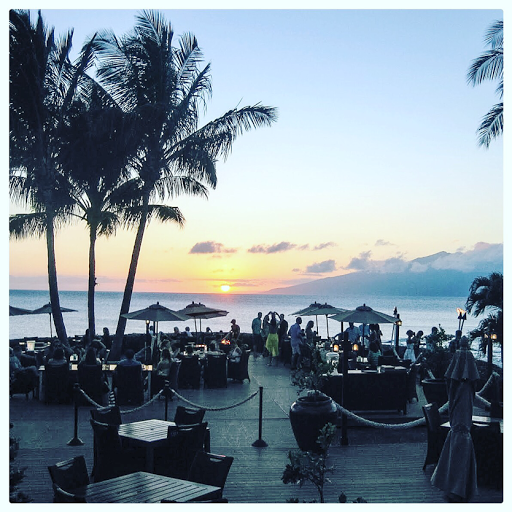 Merrimens, Maui, Hawaii. This restaurant was one of three on the Kapalua
resort where we stayed. It is probably the most beautiful restaurant I’ve ever
been to and was filled with the most glamorous people. There was a woman sitting
near us and we knew she was famous, but could not work out who she was! Above was the view from our table. 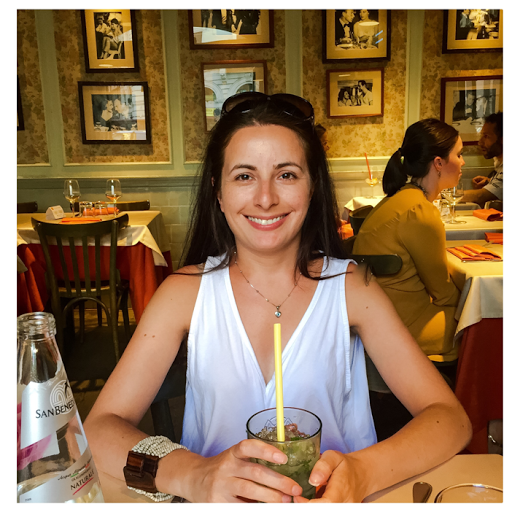 That’s Amore restaurant, Rome. Matthew had read somewhere that That’s Amore was the best
pasta place in Rome so of course we had to try it. It was definitely nice, and
I felt like we were in a Roman movie. Here I am, very tanned in my white dress. 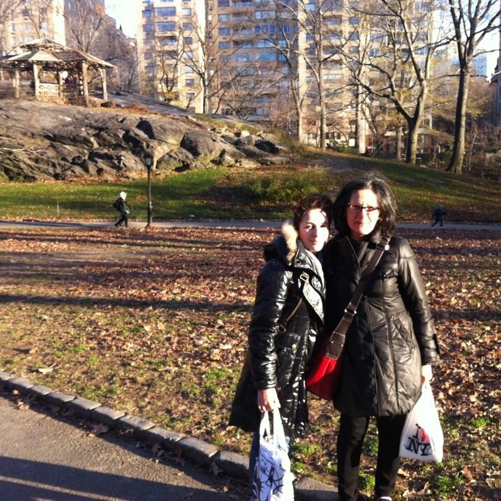 Taking a stroll through Central Park. Mum and I were on our way to the Jewish
Museum and we asked a passerby to take our photo. It was very cold that day,
and my mum was wearing socks with her sandals (LOL). 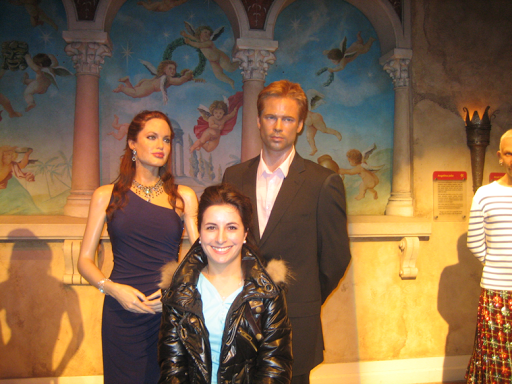 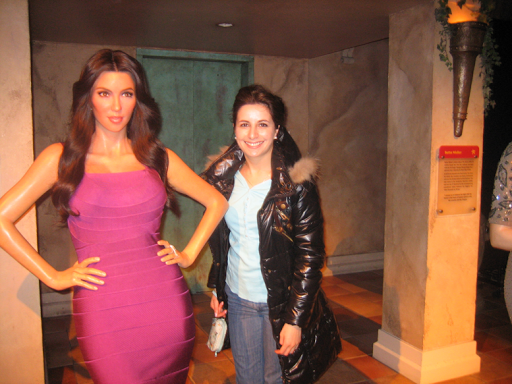 Meeting Brad and Angelina in New York. Well, almost. Mum and I had too much
fun posing with all of the celebrities at the Madame Tussuad’s Museum. As you
can see, I really got into it. 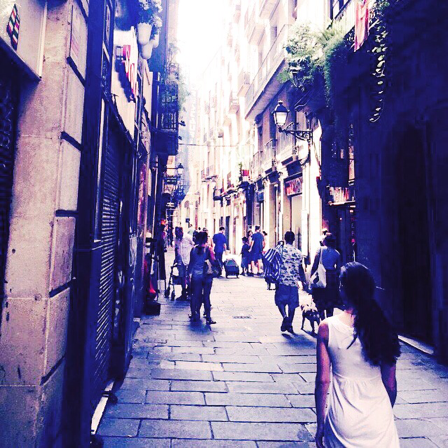 Walking the streets of Barcelona. I’ve been watching Spanish movies for
years so it was a dream to visit Barcelona. Here I am strolling the
cobblestoned streets. 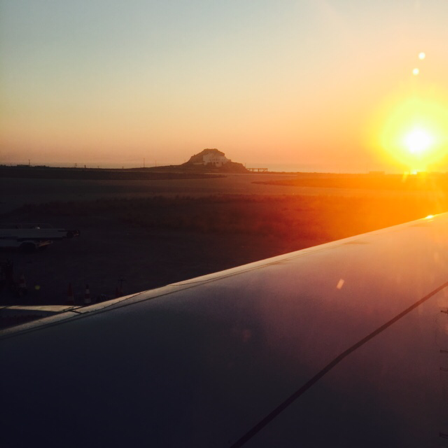 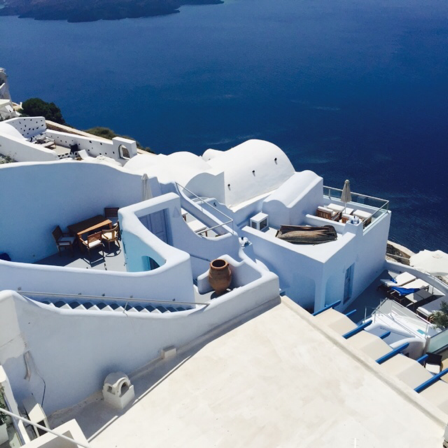 Firostefani, Santorini. The first thing that hit me about Santorini was how
bright everything was. It really is postcard worthy and exactly how you’d picture it to look. I took the top photo when we landed at Santorini at 6:45am; the photo below was taken later that morning. I remember standing outside our villa the morning we arrived and feeling blinded by the view. 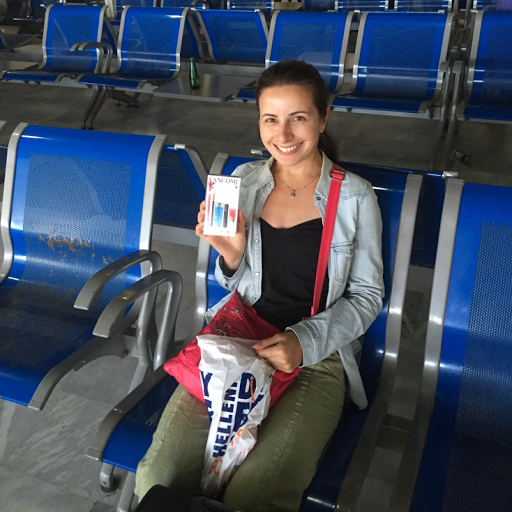 Waiting for a connecting flight at Crete airport. I had just made a duty
free purchase (or two) and was feeling very happy with myself. I needed something to console myself after being frisked by airport security quite vigorously. 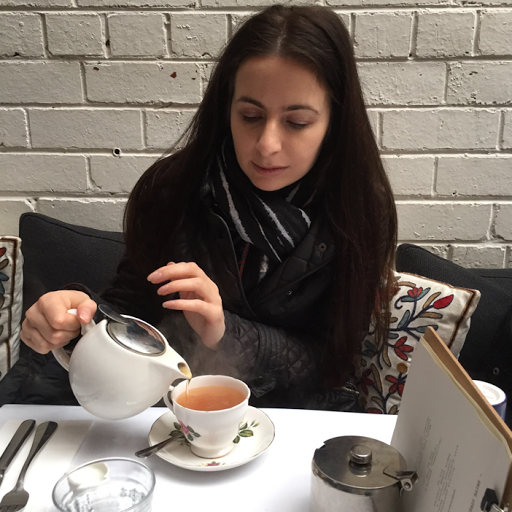 And doing what I do best, drinking tea. Matthew always snaps me when I’m unaware; he thinks it’s hilarious.

What are some of your favourite places to travel to?