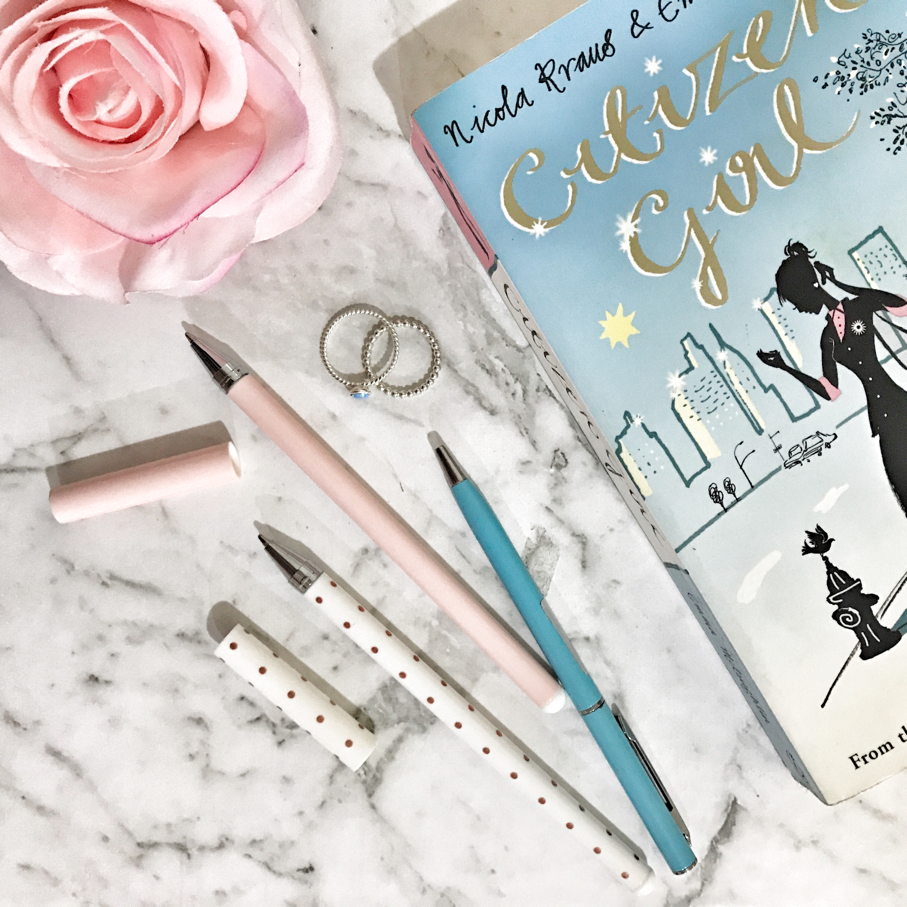 I still remember the
excitement of walking into a bookshop as a child. I had a pocketful of, well,
pocket money and I would make a beeline for the children’s section,
anticipation building to what lay ahead. The Babysitters Club was huge back
then, and it seemed every pre-teen was reading up on the babysitting adventures
of Kristy, Maryanne, Claudia and Stacey. I’d wait impatiently for the newest
book to be released and then devour it in a matter of hours (sometimes under
the covers with a torch so I wouldn’t wake my grandma, who was my roommate at the time).

Fast forward many years later and while I don’t visit the bookshop as often
anymore, I still love to read. There are a handful of books that I can read
over and over again so today I’ll be sharing those with you! 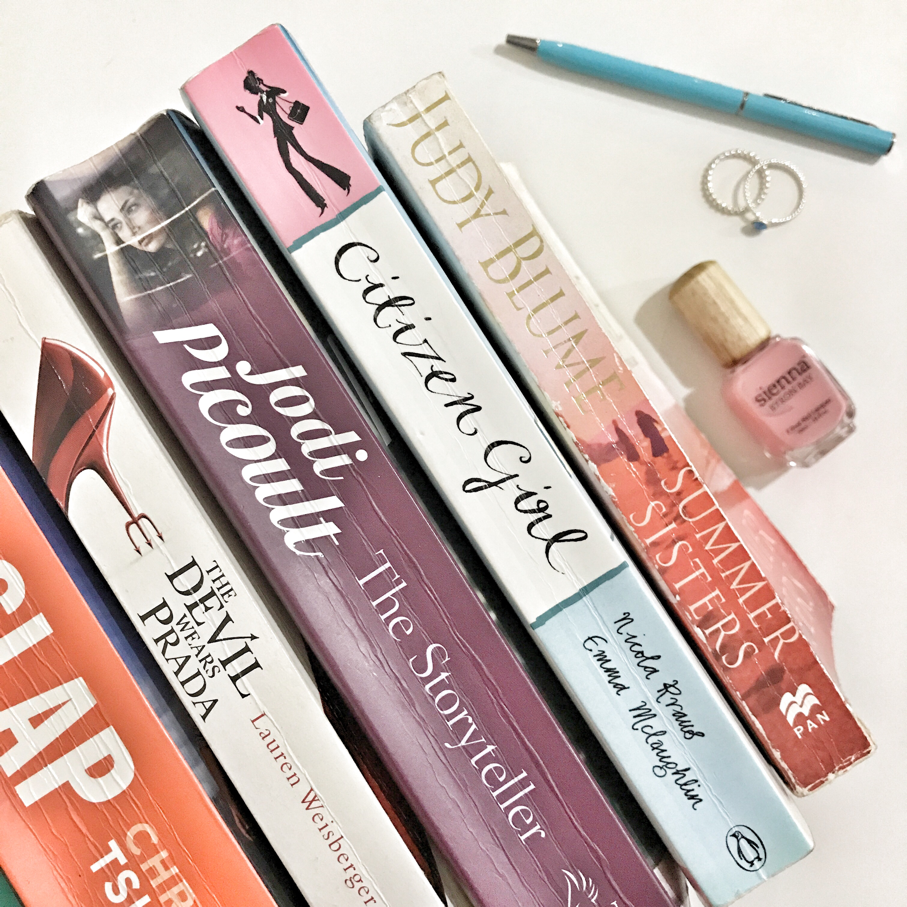 The Storyteller by Jodi
Piccoult. How I wish they’d make this novel into a movie. In a
nutshell, this book is about loss, guilt, betrayal and hope. The story centres around Sage, a young woman who has
suffered loss in her life. Her only friends are her manager Mary, her grandmother Minka and
an old man she befriends, Josef. While I’ll try not to give too much away, Sage
learns that Josef is not who he says he is and the story then goes back in time
to wartime Germany, Poland and the Holocaust. It’s a moving story that will most likely
leave you in tears, but will also give you a sense of hope, compassion and
understanding. If there’s one book you should read now, make it this one! I’ve
recommended it to several friends and family and they have all loved it.


White
Oleander by Janet Fitch.
I watched the movie before reading the book and immediately went out and purchased the novel. White Oleander is about a young girl called Astrid, whose mother is
mentally unstable and ends up in jail for murder. The storyline
follows Astrid as she moves from one foster home to another, and it’s heartbreaking to see her become bitter and jaded as she drifts through life without her mother. I always prefer to read the book before watch the movie version as I like to imagine the characters a certain way; once I watch the movie it’s hard for me to draw my own conclusions without becoming biased in some way. There were big differences between the novel and the movie, and as expected I much preferred the novel. Astrid in the movie was much more clean cut and innocent; in the novel she was grittier and to be honest, a bit unlikeable at times. Some parts of the novel were a bit difficult to digest but I found that it made it more relatable and human like. I highly recommend this book if you like a grittier read.
Summer Sisters by Judy
Blume. I was obsessed with Judy Blume growing up and owned all
of her books (Just as Long as We’re Together and Tiger Eyes were my absolute
favourites). I first read Summer Sisters as a teen and loved it. I think I’ve read it
about thirty times since then. Summer Sisters tells the story of two unlikely
girls who become friends, and follows their lives from childhood to adulthood.
Vix (Victoria) is the quiet, sensible one while Caitlin is wild, unpredictable
and the complete opposite of Vix. They form an unlikely bond that spans
decades, and even though their lives go separate ways at times, they never
quite shake off that obsessiveness they have for each other. To this day I
still don’t have answers for the ending and probably never will! What I like
about this book is how I can relate to each decade that Vix and Caitlin live
through; the teenage years, the uncertain college years and later, their
thirties and beyond.

The Slap by Christos
Tsiolkos. You may have watched the series on television with Melissa
George and Jonathan LaPaglia, but I highly recommend reading the book. In
summary, a child gets slapped at an outdoor BBQ by a person who is not the
child’s parent. Each chapter is told by the perspective of one of the eight
main characters who bore witness to the slap, and details the repercussions of the
action. It’s gritty, raw and to be honest, none of the characters are that
likeable. In saying that, that’s what makes the characters so relatable; they
are unapologetically flawed, honest and it’s not hard to connect with them in
some way. It’s a heavy read and touches on issues such as infidelity, domestic
violence and the burdens of adulthood and parenthood. I personally like stories
that are realistic and honest, and the fact that it’s set in Melbourne makes it
even more relatable for me. Like all of Christos  Tsiolkos’ novels,
it is unflinching and hard to read at times (if you’ve read Dead
Europe you’ll know what I mean!).

Citizen Girl by Nicola
Kraus and Emma Mcloughlin. This book was written by the authors
of The Nanny Diaries, which was made into a film starring Scarlett Johannssan.
Citizen Girl is an oddly written book, and it can take awhile to get used to
the style and language. Case in point: the characters are all given very basic
names. The main character is referred to as Girl, her boss is called Guy…you
get the drift. Girl is in her mid twenties and has moved to New York
City to make her mark. She is a feminist through and through and is adamant
about changing the world for the better. After losing her job, Girl finds a job
that seems too good to be true; her boss is encouraging, her salary is enough
to afford a second hand Gucci coat and life seems to be on track. Things go
downhill after the company is pitched to buyers and Girl quickly finds herself
working for a company that stands for anything but what she believes in. It’s a
quirky, funny-at-times read but what I really like about it is the message of
standing up for what you believe in, no matter the cost. I took this book with me on my first trip to New York and there was something special about reading about the city whilst actually being there.

The Devil Wears
Prada by Laura Weisberger. I remember reading this when I first started
full time work in Melbourne and it was the perfect companion at a time when I
was feeling unsure about myself and my future. You’ve most likely watched the
movie with Anne Hathaway which was great, however I still prefer the book. The
story follows Andi Sachs, a graduate fresh out of college and looking for her
one break into her dream job of becoming a writer. She accepts a job as a
personal assistant to Miranda, the most important woman in fashion (widely
thought to be based on Anna Wintour). What follows is a look into the fashion
world and how cutthroat the industry can get. Andi finds herself working for a
boss from hell and the demands of her job slowly start to take over all aspects
of her life. It’s set in New York City and perfectly captures the stressed out,
busy lifestyle that New Yorkers are known to have. While it’s not a deep read,
it is really interesting and offers an insight into a world that is really far
removed from most of us.

Books are like a comfort blanket to me; I reach for a particular one depending
on my mood and it’s the perfect way to soothe myself if I’m feeling down or
anxious. These six books always guarantee to make me feel better and less
alone.

What books do you love to read over and over? Can you recommend any of your
favourites?